The marijuana community is a thriving one and with just about everyone claiming to be a “stoner” these days, making friends is easier than ever. I myself might or might not partake in floating on Cloud 9 and having something funny to watch while sitting high is always a must (along with having the snacks on deck of course.) Two lovely ladies residing in Los Angeles, CA have created a YouTube show for the stoner community to enjoy and I am a fan. “City Chicks” follows friends, Jazzy Rhia and Katina, on their daily adventures of being high around LA, hanging out with friends, and other antics. With hilarious cut scenes and artist features at the end of every episode this show has tons of potential outside of YouTube. Plus with also having their own production company, Three W Productions, these ladies are a force to watch out for. I was able to get the scoop on Jazzy and Katina and their show.

Who are “City Chicks? I’m Jazzy Rhia and aside from being the director and editor of the show City Chicks, I also do music. I’m Katina and aside from writing and creating the skits for the show, I’m an avid distance runner.

What made you want to start your own show? And about marijuana on top of that. Originally, we wanted to write a classic stoner “dude” movie just for the fun of it. We came up with the idea because we had all the equipment and access to actors to be in the movie. After telling a friend about the script, he proposed we base the movie about ourselves. The energy started to flow and our movie transformed into a variety skit show based around our lives. Before we started the show neither of our parents even knew that we were cannabis activists. We could’ve easily created a show that didn’t involve smoking on camera, but because marijuana plays such a big role in both of our lives we had to keep it “one hunnid.”

Where do you get inspiration to write each episode? From our everyday life experiences. Some of the skits are based on past situations that happened at some point in our lives. The other half of the skits are usually thought of in the moment when were blazing with our friends. Its incredible how the energy starts to flow between all of us. Being that we are stoners, we always make sure to jot down the ideas on our phones so we don’t forget them.

I love how you showcase artists at the end of the show, what inspired to do this? Being that Katina and I first bonded over our love for dope music, there’s no way we would create a show without it. We wanted to create the same feeling that many variety shows create by starring musical guest (such as SNL, All That, and The Dave Chappell Show) but on a more underground level. From being on the scene back in Florida I (Jazzy Rhia) had the pleasure of connecting with many artists who are dope at what they do. Giving them the opportunity to gain a new fan right along with us is just our way of showing love.

Do you want to keep your show on YouTube or would you market out to television? We originally imagined our production company Three W Productions making its biggest impact online first. We appreciate the underground community and would like to see just how large of an audience we can build before signing a deal of some sort. However, after reading the recent rumors about Youtube’s new plan to block Indie content in order to make room for their new greedy platform, we are currently at the drawing board with our production company’s next move. Regardless of whether or not our content gets removed from Youtube, we are most definitely interested in seeing City Chicks land a suitable network deal before shooting a second season.

This is the first show I’ve seen like this on the internet featuring women holding down the stoner culture. How will you guys maintain to staying different with your show? We will continue having fun and staying true to ourselves until the wheels fall off!

What advice would you give other stoners and others about starting their own show? First things first write everything down! Surround yourself with positive motivational stoners, get a camera, and just have fun with it! 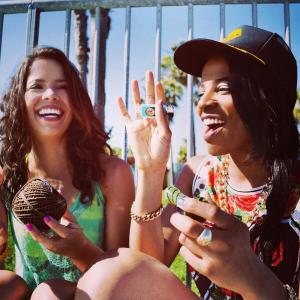 Was the move from FL to CA a hard one or more exciting? What sparked the move? I (Katina) decided to move to Los Angeles after falling in love with city and the culture here. It was an exciting adventure to start a new life in a place so far from my element where I barely knew anyone. At the same time it was also a difficult journey and I endured some lonely nights, but I learned a lot about myself and built a life to call home in the west coast. For me (Jazzy Rhia) the move was definitely exciting and easier thanks to Katina. I originally moved to Cali to pursue a music career in production and songwriting. With Katina already being established here a couple of years prior to my move, the transition was a lot easier for me. She and a friend basically took me in, making it possible for me to actually focus on my craft. Within a couple of months of living together we soon came up with the idea for the show and production company. 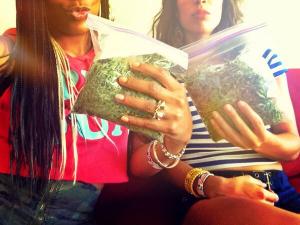 Thank you so much Jazzy and Katina for the interview and keep holding down the stoner community for everyone with “City Chicks.” Eveyone check out Episode 4 below. Follow them on Instagram, Twitter, and Facebook. Also peep their website. “Spark Up and Keep Laughing.”