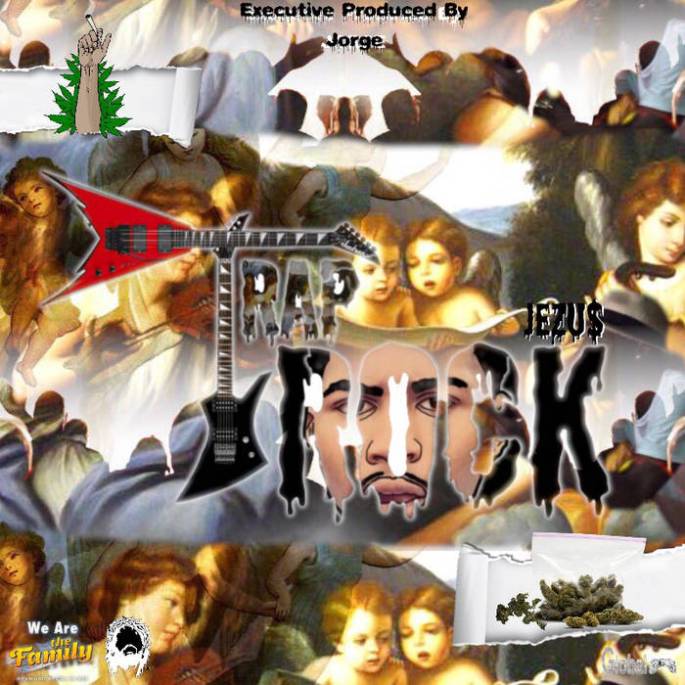 ReVMusic Records artist, 006SET member, and Queen City native, JEZU$, is tapping into his inner rockstar with his latest project, Trap Rock. The 12 track debut (4 bonus tracks are available on a deluxe edition found on Bandcamp) is the foundation that JEZU$ needs to begin his legacy in the music scene of Charlotte and beyond. With features from Kumor and Fendi Benz of 006, Ryn of RVMR, Sleepy Floyd and Deezy and production from Red Benji$, Jay Storm, Apo11oTONE, 87 Klub and executive produced by JORGE. The project is straight flames and I got the chance to get more info behind Trap Rock and JEZU$ himself. Read about it below and afterwards, stream Trap Rock in full and watch the official video for “FLEXIN”.

1. First off, why the name JEZU$? Do you see yourself as a prophet for Charlotte?

JEZU$ is just a stage name, I embrace it though because it’s creative to me. There are so many ways I dodged the regular name…I believe in Jesus, so don’t get it confused and yes I see myself as a prophet.

2. Where did your love for music begin?

My love for music?? Man I’ve loved music all of my life…ask anyone that grew up around me. I used to freestyle at like 6 or 7 straight fire bars so I guess that’s when I really found my true love for it. Just never thought I’d actually be a rapper.

3. Where did you get inspiration for Trap Rock?

Shit I love trap music but my nigga Dame was like, “You, you have a different sound (like my energy in my music), you a rockstar.” After all the raging and jumping up and down after songs, it really hit me-I’m a young wild ass kid who makes trap music.

4. How long did it take for the project to come together?

Originally, the tape was to be named 704GOD and I was like, “nahh that’s ass”, I came up with that idea in like July. The mixtape took a good 6-7 months to find my exact sound and now I officially have my sound.

5. A few years back we all remember when Wayne went through his rockstar phase. Is this a phase for you or are you really about the “Trap Rock” movement and emulating a rockstar lifestyle?

Wayne’s shit was dope, I remember, but nahh nothing like it. This is me. I’m about this trap movement. It’s plenty of guys who are a “Trap Rockstar” artist, but I haven’t seen anyone put a stamp on it yet. That’s what I’m doing.

6. Why did you choose the features you did for the project?

The features for my project were good people I worked with. RYN, Sleepy Floyd, Deezy and Kumor are all good friends of mine that just all went hard in the studio. I appreciate them, they made the songs sound way better. Shout out to them for blessing the tape.

Joining 006 is the best thing ever yo!! Frais is my big brother, I was originally fucking with my nigga Kumor who was already apart of the SET. Him and I have our own group which is GuiltyBlock, a name him and I run with, but he let Frais and a couple more guys in the SET hear my music and they were fucking with me. So they taught me the handshake and I was in. Feels like home.

8. What was your favorite moment musically of 2015?

My favorite music moment of 2015 would have to be my show in Clemson, SC. That shit was too fucking turnt!

9. Whats next for 2016? Any artists in particular you would like to work with this year?

2016!! Boy oh boy! My last year being broke. Man I have hella shit for y’all. TRAP ROCK 2 of course! A collab tape with my homie Worthy and Jorge which is going to be flame! A couple of tours, 2016 is a busy year and I’m ready for the grind. Artists I’d like to work with? Spooky Lean, Rashaun Hampton, my homie Fendi and Well$ !!

JEZU$ wants to leave everyone with these last words:  Shout out 006! OGOD! Live forever! My Rev family and shit that’s really it! Go get that new TRAP ROCK on Spinrilla and rock out!

One thought on “ToD Interview: JEZU$”