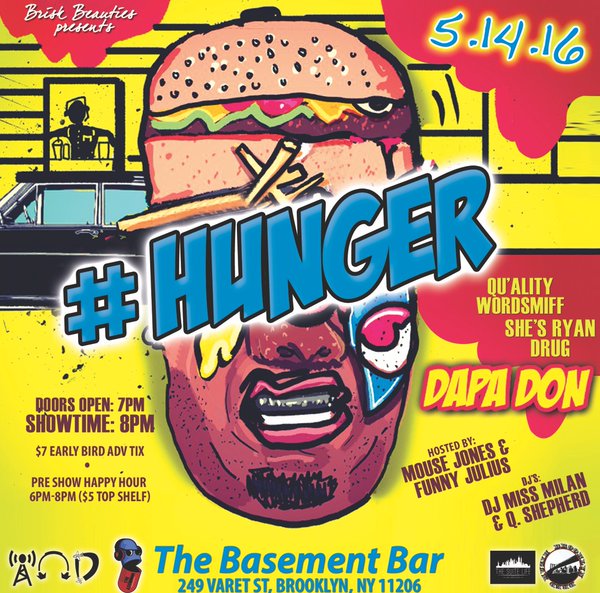 This past weekend, Dapa Don held his #Hunger event at The Basement Bar in Brooklyn and it was lit. I have to start out by saying I knew it was going to be a good night when I was driving to BK and the toll guy at Robert F. Kennedy bridge was bumping “Paranoid” off 808’s & Heartbreaks. The venue lives up to it’s “basement” name as it was small but this actually served as a positive because the vibes were able to be more collective. There’s a hostel on top of the venue which is also very cool. I arrived after 8 pm because I always have to be fashionable late but yet on time, however I missed the happy hour special from 6-8 pm. I ordered a drink and started to mingle. Funny Julius and Mouse Jones were the hosts for the night and Julius started it off and not even 30 seconds into him introducing himself, he embarrasses me by pointing out how attractive my feet were. I nervously laughed it off as everyone stared down at my feet for that moment. While performances were still getting prepared, DJ Miss Milan played all of the groovy 90’s dance jams like “My Boo” by Ghost Town DJ’s and had everyone moving. She kept this up the whole night as Q Shepard followed suit when it was his turn to take over the tables. It was finally time for the performances to start and Ab$o The Great was up first. He only performed one song which for some reason riled Mouse Jones but the artist left his mark nonetheless. Next, Loyal Duce comes on to set the bar of getting everyone hyped. His neon Nike’s had me mesmerized as he performed on stage and had everyone on go. At this point it was time for another drink so I make my way back to the bar. While I’m waiting impatiently at the bar because there was only one bartender, Wordsmiff and Yeah Req start to perform and they serve as crowd favorites. Everyone knew the lyrics to Smiff’s tracks. DJ Miss Milan and Q Shepard get the crowd back on some hot 90’s dance once again and I’m not exactly sure which break this was of the night but they played “Before I Let You Go” by Frankie Beverly and Maze and everyone broke out into a collective Electric Slide. You have to love black people. The gorgeous She’s Ryan was next to grace the stage and everyone gave her the respect she deserved after a little technical troubles. She was an angel on stage as lights bounced off her statement jewelry from Lost Queens and gracefully performed through her set. Qua’lity was another crowd favorite and made sure to get everyone pumped for the headliner: Dapa Don. Dap had a live band and backup singers for his set. Of course, he gave fans music off his latest #FOOD2 project and I got to catch my favorite track before I left. The event started late which meant I left early because I don’t like driving too late at night but I got a good 15 mins of Dap’s set so I was satisfied. Through all of the commotion in that basement, #Hunger was a great show with great vibes. The recap footage is coming soon.